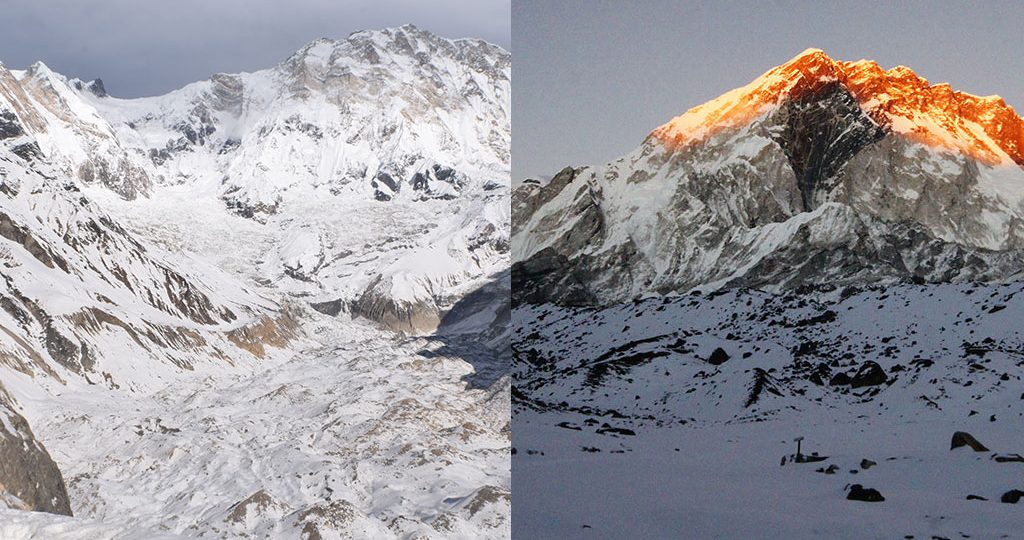 Annapurna and Everest Base Camp trek are two of the famous treks in Nepal. It is every trekker’s dream to trek to these regions. But deciding which one is better can be a tough decision.

Both of these treks are equally amazing with its own share of beauty. If you are thinking of choosing one then allow us to usher you through the various factors that will help you compare before you choose one.

Weather: Annapurna Base Camp Vs Everest Base Camp

Because of the higher elevation, Everest Base Camp is colder than the ABC.

The Summer season in Nepal is also the monsoon season. The places with higher altitude in Nepal receives lower rainfall that places with lower altitude. Because of this, the chances of rain in the Everest Base Camp is lower than in Annapurna Base Camp.

Hence if you are looking for monsoon trek with less interruption, you should definitely opt for EBC.

On the other hand, the temperature during winter in Everest Base Camp is lower than Annapurna Base Camp.

So if you are someone who is planning to trek in December or January but do not want to face very low temperature, ABC is the destination for you.

Spring and Autumn are the best seasons. Hence you can find many trekkers in both of these regions during this season.

Altitude: Annapurna Base Camp Vs Everest Base Camp

Another factor to look upon before you consider while trekking in these regions is altitude.

Above listed are the places that you will pass through while trekking to these regions. Places along EBC are much higher in altitude comparing to ABC. Because of the higher altitude, you need to spend a few extra days in certain places of EBC trek for acclimatization.

Trekking Duration: Annapurna Base Camp Vs Everest Base Camp

Trekking duration is also one factor to consider while choosing EBC or ABC. Everest Base Camp trek is slightly longer than ABC. This is because you have to spend a couple of days for acclimatization in the high altitude of the Everest region.

The standard EBC trek will take you 14 days to complete. While you can complete the Annapurna Base Camp trek in 12 days.

However, you can also shorten the number of days for both of these regions. The shorter itinerary of ABC and EBC are 6 days and 10 days.

Though many would wish to complete the trek in less number of days. It is very important to understand the importance of acclimatization.

If you choose to go to other places in the Everest region, you can customize your trip. There is a trek route from Jiri to EBC which will take you 22 days to complete.

Accessibility: Annapurna Base Camp Vs Everest Base Camp

To reach Pokhara you can either take a bus or a flight. A local bus will take you to Pokhara in about 7 hours. Or, you can take 25 minutes flight to Pokhara from Kathmandu.

Whereas for EBC trek, you cannot drive to Lukla yet you can take a flight that will take around 45 minutes.

There is another trekking route to EBC where the starting point of your trek is Jiri. Jiri is accessible on a bus and it is about 8 hours drive from Kathmandu.

The Scenery: Annapurna Base Camp Vs Everest Base Camp

The Annapurna Base Camp trek has more to offer than just mountains. It begins from fertile lowlands, passing through rice fields, oak and rhododendron forests. In April, the rhododendrons are in full bloom.

The mountains, beautiful terraces, dense jungles, and farming communities are simply breathtaking. In ABC trek you will pass through the canyons of Modi Khola, high glacial pass and landscape of the Tibetan plateau.

Also in the Annapurna region, you will get the striking view of Mt. Machhapuchhre and Dhaulagiri. Here the Himalayas surround you from all sides.

Everest Base Camp trek, on the other hand, is a high altitude trek with a spectacular and direct scenery of the Himalayas. It is the perfect trek for all those mountain lovers.

Here you will get a glimpse of stunning glaciers, ancient monasteries etc. As you get closer to the Base Camp, the mountains tower right above you and their beauty will leave you spellbound.

This trek takes you to the base of the world’s highest mountain. Here you will come across Kalapathar from where you can get the best views of Mt Everest.

The largest monastery of the Khumbu region is the Tengboche Monastery. This is a truly authentic Buddhist Monastery and one who should not miss visiting.

From here you can get the spectacular views of the mountains peaks like Mt.Everest, Mt.Nuptse, and Mt.Lhotse.

Communities: Annapurna Base Camp Vs Everest Base Camp

The Annapurna Base Camp trek passes through rural settlements. There are small farming communities that reside along the valley.

You will meet Gurung people here esp in the village of Ghandruk. There are traces of Hinduism and Animism along with the Buddhism in the region.

If you are looking for more local flavor from your trek then Annapurna is the stronger choice.

Everest, on the other hand, is the home of Sherpa people and Buddhist monasteries. As you pass through the trail you will feel a strong sense of spirituality.

You can meet the Tibetan traders in the village of Namche Bazaar. If you are trekking the region in March and April, you are likely to come across professional teams preparing to make their summit climb in May.

Difficulty Level: Annapurna Base Camp Vs Everest Base Camp

Both EBC trek and ABC trek are moderately difficult. Yet anyone can complete these treks with a little bit of training and proper guidance.

Whereas the Annapurna region offers a wide variety of trekking routes. And you can choose a short easy trek that doesn’t exceed 2000m altitude.

But it is important to be physically fit for both of these treks. However, you don’t need any kind of professional training. What you can do is get involved in basic training like jogging, running, hiking etc that will help you with building your stamina.

Best Time to Visit: Annapurna Base Camp Vs Everest Base Camp

For Annapurna Base Camp trek the best time is in Autumn. This is when the monsoon ends. During this time there is less dust and pollution that makes great views of the Himalayas.

The weather during this time is also favorable. It is neither too hot nor too cold. Spring is also a good option to take ABC trek as the rhododendron and other flowers are in full bloom. This makes trekking experience very pleasing.

While the best time for EBC trek is in October and November. During this time there is a better chance of clear skies and the weather is mostly pleasant. Also during this time, there are fewer trekkers on the trails as most climbers aim Everest Summit in around May.

Extras: Annapurna Vs Everest Base Camp

The facilities in Annapurna is less developed compared to the Everest. You will come across only a few western toilets.

Only very few places have attached bathroom. Most bathrooms are outdoors which can be a problem during the dark.

Everest is more famous among the tourist hence this region has better tourist standards. Tea houses on the Everest route have a shared indoor bathroom which is common in lower altitudes.

The rooms in the Everest region are much nicer.

Food is pretty much the same in both regions. Both the regions offer the local cuisine along with some others. Dal Bhat Tarkari is the most common dish you will find.

You will find more veggies in the Annapurna region because of the farming communities that reside in the place.

In Lukla, however, you can find Starbucks. Here you can also find foreign cuisines.

Annapurna Base Camp trek is more affordable compared to the Everest Region. The price of food and accommodation is reasonable. The transportation cost is less as it is easily accessible.

While on the other hand, the Everest region is more expensive due to various reasons. Because Everest has the bigger brand name the permit cost is high. The region is more luxurious with standard tourist facilities.

The cost adds up with the flight ticket to Lukla. Yet you can save this by traveling from Jiri.

There is no transportation facility in this region. Men and mules carry the goods. Thus the labor makes the goods more expensive.

It is difficult to compare the crowds as it really depends on the season of trekking.

The EBC trek is usually much more crowded and large groups are common. The Annapurna Base Camp generally features hikers in pairs and small groups and is not nearly as busy.

Both EBC and ABC trek offers great opportunity to explore the amazing Himalayan destinations of Nepal.

However, if it is your first trek then ABC might be more suitable for you. The altitude of the places along the trek are lower and the whole trip is shorter in duration.

On the other hand with a little bit of training and planning, there is no reason not to take on the EBC trek. Comparing the factors mentioned above you can weigh them down and choose the trek which best suits you.

Since both regions are popular and well-known trails. No matter which trek you choose, you will have an incredible trekking experience.

Further question and queries, please feel free to contact us. It is our pleasure to assist you with the best of our knowledge.

How Much Does It Cost to Trek Poon Hill? 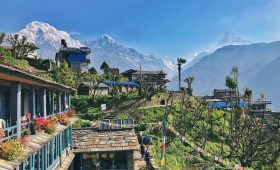 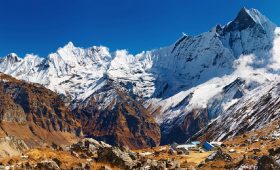